The tradition of pewter casting figures and ornaments were known already in ancient times. From there until the middle of the last century mainly as kids toys. Later on, their appearance got more and more realistic and historical events became the main theme. Initially mainly military interpretations, later on more and more civilian. Today we find them in any kind of visual arts.

From historic figures, to rural motives up to Christmas decorations. Today many renowned artist design, engrave and paint these pewter figures and ornaments, boosting their value on the collectors market.

Pewter figures and ornaments are divided into two categories: The traditional flat figures engraved into slate and cast into the mold and on the other hand the plastic model, where the sample is transformed into the mold.

Most of the tin figures are still poured from a tin alloy according to a century-old recipe of about 55% tin, 39% lead and 6% antimony. This is the only way to guarantee the high detail accuracy and fineness of the pewter figures.

Sometimes a lot of time elapses before a pencil sketch becomes a sellable tin figure. Whoever is familiar with the whole process of development knows how much work and skill is behind the lovely figures. When the sketch of the design has been finalized, the motif is worked out as a negative relief by a hand engraver with a stylus and scraper from the flat slate slabs. The front and back of the relief must be absolutely perfect. Multiple sample casts are made and the original is improved until the mold finally fits. The work is similar to a stonemason or sculptor, except that the figure is not a positive, but a negative image.

The cast by hand

The pouring itself takes place relatively quickly: with a pewter casting spoon that is heated to around 400 degrees Celsius, the melted tin is poured into the double-sided form. To allow the air to escape, the model also features fine air ducts. The heated metal flows into all cavities, cools and solidifies. Just a few seconds after the casting, the mold is opened and the silvery blank can be removed from the slate mold. Then the thick sprues and the air trumpets are removed.

“Newborn” figures, which cannot stand the test, go back into the melting pot. “Miscarriages”, however, are rare thanks to the practiced hands, and so the good pieces are gathering in small groups: Santas, angels and decorating hearts. They stand or lie next to each other and are waiting for them to be deburred and polished, before they are awakened to live by the painting process.

Painting is generally the last link in the long chain of work steps. It requires a lot of patience and practice before mastering it. Ultra-thin brushes are used to paint the pewter object with great love for detail – mainly with enamel colors, but also with oil or acrylic paints. Most of the painting is done as homework, by women who have completed an apprenticeship as a porcelain painter. Through the handwork each figure attains its individual expression and is a small original. 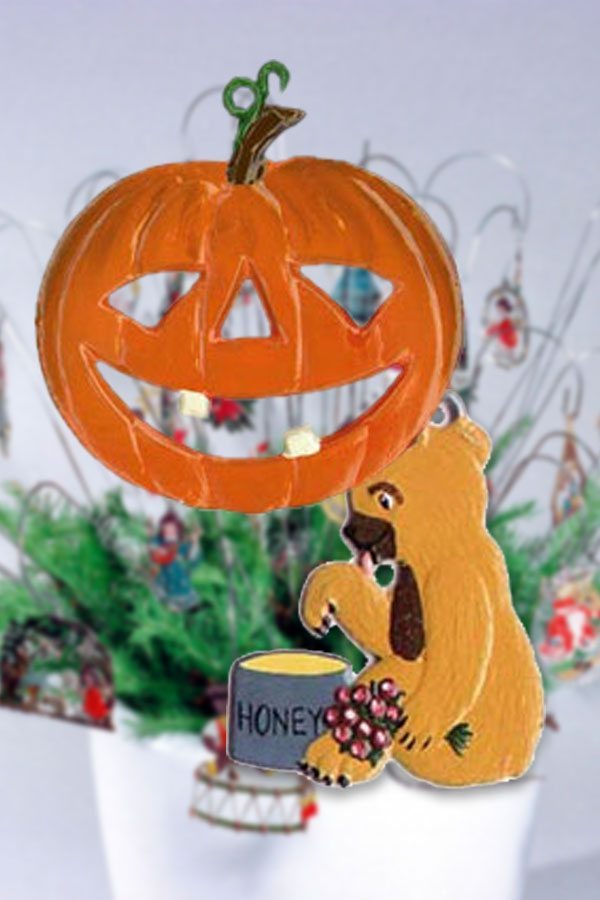