Ulrich Bernardi was born in 1925 in Ortisei / Val Gardena.

He derives from an old Ladin family. The paternal ancestors were shoemakers, the maternal altar and wood sculptors. As a sprout of a 10-member family, he spends rather barren years of youth, because only the most necessary is available.

Already in his earliest youth, his grandmother as a sculptor would be his inspiration. The young Ulrich often sees his grandmother at work and his goal is to learn this art himself. As he shows great dexterity in drawing, Ulrich Bernardi after the elementary school visits the school of arts in St. Ulrich, where his extraordinary talent is soon revealed. Under the guidance of Prof. Ludwig Moroder and Raimund Mureda, he is trained in drawing, modeling and wood sculpting.

Having spent three years at the school to learn the basics, Ulrich Bernardi started his apprenticeship with master carver Hermann Kostner. For the first time, he encounters the field, which from then on is the most intense passion and joy to him: the carving of nativity scenes.
After two years, his master eventually suggests that it was now time for Ulrich Bernardi to open his own workshop. This praise, which is more powerful than any loud talk, is pure inspiration for Ulrich Bernardi. He remains in the workshop for two more years and can perfect himself as a sculptor.

During the years of WWII, Ulrich Bernardi is drafted for military service into the German army and is used in Friuli / Upper Italy. He intuitively takes five woodcarving knives along from home. These are of great use to him during the period of service, since his skills also left an impression on his superiors and prevented him from being sent to the frontline. Returned home from the turmoil of war, the artist opens his own workshop.

The following years, Ulrich Bernardi dedicates himself to the carving of Nativity scenes, until one day the ANRI Company contacts him.
This was the beginning of a decade-long cooperation which was very fruitful for both sides. Over the years, a whole series of incomparable works of art and models have emerged – putti, angelic heads, innumerable depictions of saints and of course the crib series. Also popular among collectors are the numerous nostalgic children’s figures created by the sculptors according to the drawings of the world-famous Australian artist Sarah Kay in wood.

Ulrich Bernardi lives a little above the church in Ortisei, on the sunny side of Val Gardena. From the window of his workshop you can see the village below, quiet and peaceful, above it the majestic mountains. Who ever got a glimpse of this view, realizes where Ulrich Bernardi got his energy and inspiration, combined with his deep faith, from.

His works have been honored at various exhibitions all over Europe – they reflect the real timeless European style. 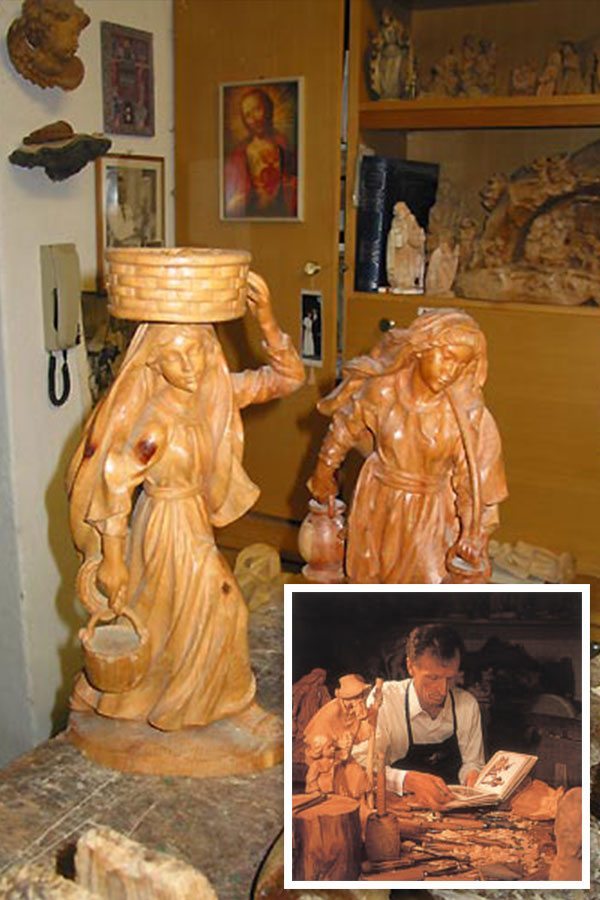